Day 1 – decisions decisions…
The New Year started with a beautiful sunny day in my village, nearly 900 m above sea level. Could see the Alps right across Switzerland. Not a cloud in the sky. 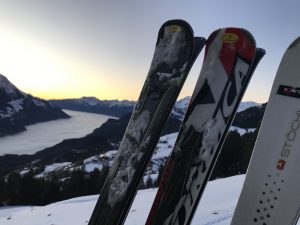 Hasliberg above the fog about 5 pm

Decided to cycle down into the valley as I was meeting two friends for a walk and lunch. (My first day of walking my talk, and doing my bit against climate change, by not using my car, unless absolutely essential. Discovered that public transport to our village starts 3 hours later on public holidays!) Took it as a good opportunity to pump up my bike tyres and cycle down the hill to the train station.
Decided to travel light and not take hiking shoes as the friends I was meeting weren’t

likely to walk too far before lunch. My mountain bike cross cycling shoes would be more than adequate. Decided didn’t need gloves as it was a beautiful sunny day. Halfway down hill I realized my folly. Suddenly I was cycling through thick fog but it was too late to return for gloves. Decided to apply an old cycling days trick from South African winter training where day starts cold then heats rapidly. Took off my socks and used them as gloves. Phoned my companions once in the valley and asked if they would rather come to my village for a hike as it was sunny back home. No takers. One friend was happy to stay in the fog as she wanted an easy day at home not traveling anywhere, another wanted an adventure in the sunshine, somewhere grander than my village. I took the second option. After driving quite a bit in the fog (her car) we ended up above the fog at Hasliberg. And parked in Twing (in the parking garage). ski lift map of region plus how to get there.

Fog always surprises me with its clear boundaries. It’s like depression. Once you are out of it you wonder what the fuss was all about. When you are in it you can’t imagine that a few feet above you there is heaven, another world, beautiful sunny places to hike, ice-scapes to admire, ski slopes to ski or bob sled down…etc. Escaping depression, like escaping fog, one simply has to move one’s body to change perspective. Walk or climb to raise one’s feeling state, which is really a massive shift in altitude, even if one is just walking round the block. 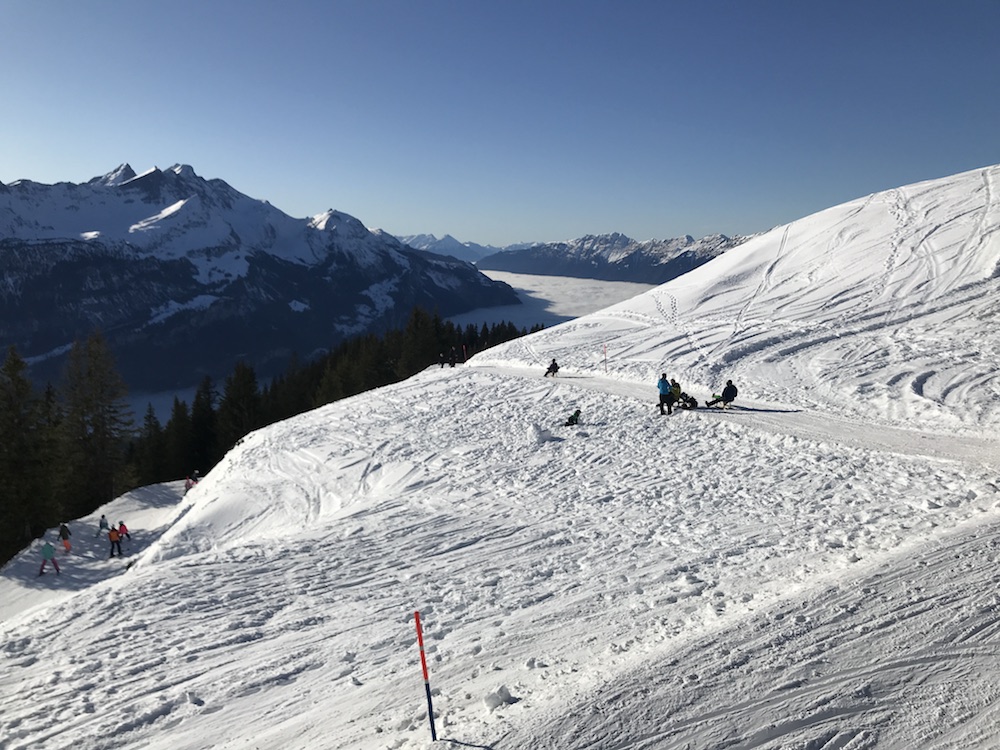 We took a ski lift up to Käserstatt 1840 m. (Only 12 Fr one way if you have a SBB halbtax abo. 24 fr if you don’t.) A first for me to go up a ski lift without skis in cycling shoes and autumn clothes! Fortunately I bought a new pair of woolen gloves at a filling station en route.
The restaurant at the top was packed. We found someone willing share a table in the sun and then took turns joining the food queue. In retrospect it would have been wiser to hike a bit to the next restaurant nowhere near the ski lift for quicker service and more individual ambiance. However it was wonderful being above the clouds, with good company, no matter where we were in the world.
The walking trail down was also a bobsled trail. Pity I didn’t think of bringing a bod sled along, let alone hiking boots. Ah well, next time! 😀
My cycling shoes have metal cleats on their soles and as we walked along the rather steep bobsled track, at risk of being mowed down by kamikaze kids on sleds, my shoes started started to grow icicles! These were perfectly fine in soft snow but potentially hazardous on hard ground or slippery slopes. We visited another restaurant accidentally, while taking a wrong turn. It was a wonderful place with a log fire, sheepskin covers on the seats and mugs of hot chocolate with snowy peaks of freshly whipped cream. However, the sun was sinking fast and there was a rumour that the next ski lift en route down closed at 4pm. (this stop halfway between Twing and Käserstatt isn’t marked on most maps and is good to know about if you are a hiker or bob sledder.)
Fortunately this turned out to be a myth. At 5pm there was a small queue to join the lift and we could still buy tickets down, thanks to the friendly and accommodating ski lift operators, as it was impossible to climb the ice slope on the other side of the lift (to where the steps to the ticket booth was) with large rounded icicles under my shoes. Once down at Twing we had a pleasant surprise at the parking garage, as parking for the entire afternoon only cost 5 Fr. 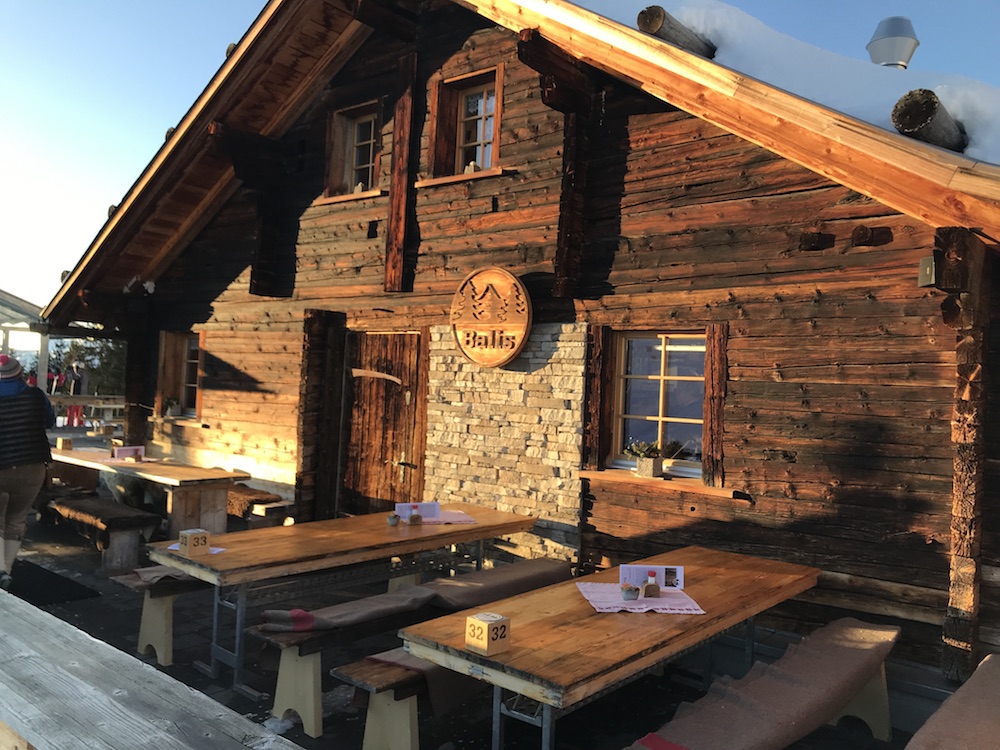 I failed to cycle back up the hill home as it was pitch dark and I was in dark clothing without a light. The last bus up to our mountain top had long gone so I decided to eat humble pie. I reached out to my son who came and picked me and my bicycle up from the train station. Could have cycled to a friend in the valley who lives near the train station to get some lights but I decided it was more fun to have a chat in the car, dinner with my son and a relaxing evening at home. Doing everything under my own steam certainly was possible but that choice would have been unnecessarily hard and lonely.
The question he asked was, “Why did you go down into the fog when half the world came up here today?” He had spent the morning clearing up with friends after the party night before and then the rest of the day in the sunshine at home practicing his guitar. I couldn’t really answer that except I’d wanted an adventure while re-dreaming the the next steps, with a different perspective from a good friend. And that certainly was “mission accomplished”.

We use cookies to ensure that we give you the best experience on our website. If you continue to use this site we will assume that you are happy with it.Ok