Perhaps you have noticed, it isn’t actually possible to ride a bike unless you keep moving. Life’s the same. The secret is to just keep moving. Here’s how.

2600 years ago Buddha said “life is dukkha” and although “dukkha” is usually translated as “suffering” it actually means “stuck wheel” as in the wheel of an ox cart stuck in the mud. With this in mind, let’s explore seven different types of “stuck wheel” that I experienced in my cycling days, what to do about each, how this may apply to your particular “stuck” state and moving on.

For example, I once had a puncture in a race, repaired it and still managed to win the race. The next year in the exact same race I had no puncture, was just as fit but came nowhere. It was a different kind of “stuck wheel”, nothing to do with the wheel itself nor my ability to turn it. The “stuck wheel” was due to me trying to stay in the game when spirit had already moved on and was no longer turning the hub.

Here are 7 stuck states to watch out for:
1. flat wheel
Think of the air in your tyres as ego. We need ego to keep us alive and to lessen the bumps in the road. If we are too deflated we get stuck but also if we are over-inflated.

If you ever go to watch a triathlon race go stand near the transition zone. If it’s a hot day, chances are you’ll hear “bang” every now and then coming from where the bikes hang out, before the riders finish the swim. “Bang” means some poor athlete’s wheel has popped due to over-inflation. Perhaps this is also what happens with too much ego. We explode soon as things get too heated and chances are, we aren’t even fully present yet when it happens.

Puncture as opportunity to connect
I once met an Irish travel writer called Dervlah Murphy who cycled right down though Africa yet could not fix a puncture let alone repair anything. I asked her how she managed and she said any mishap was an opportunity to meet and be rescued by the locals. How many of us think that way in normal life? We are so determined to do it all on our own that we fail to allow others the pleasure of shining.

2. buckled wheel
Think of your personality makeup as the different spokes in your flywheel, You are not just one type but a complex mix of many interwoven types. Each “spoke” is a different voice; a personality trait archetype or strength. There always needs to be a balance. If one is too tight or too loose, or missing, the wheel buckles and gets stuck. How to get going again? Reclaim your neglected or disowned voices. How? Look at any person you admire or one you dislike intensely or who frustrates you. In some way they are mirroring back to you a disowned part even if the image is reversed. Take Trump for example, he managed to galvanise millions of people to shift from fear or apathy to anger and then to connecting and taking courageous action by stepping forward to appose his steps backward. They have reclaimed their potential to act and make a difference. Millions of women now feel enlivened. They have also regained their disowned voices, standing their ground and even moving forward while inspiring billions of others all around the globe. The good news is, no war was required to create this huge shift in consciousness. In what way is each person you don’t like a mirror? Use the mirror to actively adjust your own position and thank whoever is holding the mirror for this amazing act of service even though it wasn’t consciously intended. Also look for some positive aspect in them, like taking radical action or being vocal. In what way is this a call to reclaim a disowned voice? 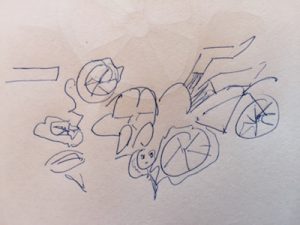 3. Crashes happen when we are not fully present. In a bike race, riders cycle millimeters away from each other without crashing. How? They are in a flow state, moving as one mind. We step out of flow states when we start worrying about things that have nothing to do with now.

4. Iced road. If the road’s frozen or slippery, wheels often don’t have a chance to turn instead they slide totally out of control. This is called fear. There are no signs to remind you, the road condition is one’s state of mind.

5. Time to move on. This is a totally different kind of stuck wheel. You may not recognise it at first or want to believe it but once you have experienced it a few times you’ll recognise the signs. Like the time I found myself scrambling at the back of the pack instead of flying up front. It wasn’t due to any wheel being stuck but more due to loss of spirit. Nothing had changed except it was simply time to move on. This is a case of over-attachment to identity. The will to win was still there but the spirit sponsoring my life was no longer willing.

6. Jammed gears. When you are getting hints to move on, monitor how this makes you feel. Do you take yourself to shame or guilt or fear or anger or frustration? Each feeling state is a useful gear in a whole cluster of gears. They each have a purpose but need to be used at the right moment.
When gears get jammed everything comes to a sudden halt. This is what happens when we get stuck in shame or guilt or fear or anger… We over-attach and fall over instead of using each gear to shift to the next gear to gain more momentum. 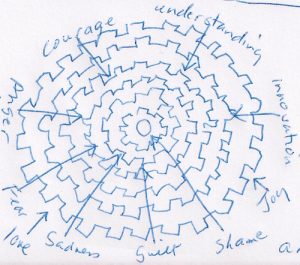 7. Not letting go of the brakes We know it’s time to move on but get “stuck” by thinking we need to know in advance what’s beyond the next curve. And we don’t know! This is where the magic happens. What some people call faith. We let go of the brakes and allow the hub of the wheel to freewheel. Life turns through us. We feel the wind in our hair again and laugh.
Or as Thomas Huebl puts it:
“Not knowing where the ground will emerge when I take the next step is an act of love”

“All healing is a restoration of movement” says Huebl. Movement creates chi not vice versa. Stuck wheel is when we over-attach to what is. Including the idea that we are stuck. Here’s a radical thought: in what way is the idea you are stuck actually serving you?

Saying “Yes” to what is. “Whatever is in your way is your way.”
We might think we’ll be faster if the road were flatter or all downhill but there’s no summit without a climb and this is what we are here for anyway.
Joy, love and appreciation are the magic lubricants for whatever is.

Usually our stuck state is driven by a fear of loss. Ask yourself “Am I motivated by fear or by love?”
Instead of asking “who am I?” ask “what gear am I in'” and “what’s driving me?”

And get your body moving. This creates energy and space around any problem. Space for new inspiration to come in from a higher mind.

To learn more about this ride from your soul’s perspective, join us in Findhorn this summer.
🙂