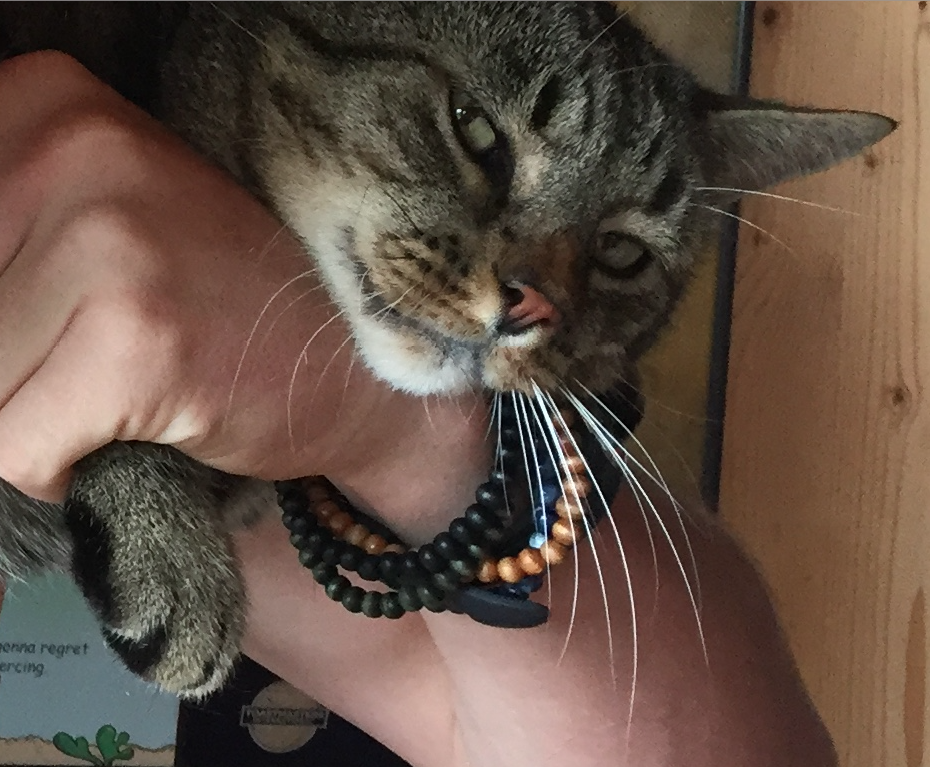 For many years we had a very special cat in our home. He looked like an ordinary cat but actually he was more like a cross between a wizard and an angel. His real name was “Expelliarmus” but most people only knew him as “Pelly”.

How did he get such name?

When my son was about four I asked him if he would like a brother or sister and he replied, “No, I’d rather have a cat!” We were in the middle of renovations at the time, running backwards and forwards between two properties so the cat was put on hold. A few years later his father and I separated and I remembered my cat promise. Our kitten hunt led us to a nearby farmstead where a cute little grey tiger bounced towards my son while the rest of the litter ran into hiding. It was love at first sight. He may not have been the best looking of the litter but he had a lot of character and his face was totally unique. He had an exquisite orange tint to his nose and cheeks, as if he had dipped his face into a bowl of orange juice. Jules named the kitten “Expelliarmus” after a Harry Potter spell.

In the Potter world, Expelliarmus is a disarming charm, used for removing a weapon or wand from one’s opponent’s hand. And “disarming charm” is exactly what Pelly had; a charming way of reaching out to others that won the hearts of everyone he met.

Besides catching mice and doing whatever cats do (I’d hate to know), he would would pop in and visit all our neighbours to see how they were doing. He really showed them he cared. It wasn’t “cupboard love”, more like “unconditional love” which he spread very generously. He was the only cat I’ve ever met who could walk into any house in the street and receive a warm welcome whether there were other cats around or not. Even grumpy or normally unfriendly people loved him and felt honoured when he dropped in.

He was primarily an outdoors cat, sometimes disappearing for days, no-one knew where to, but eventually he’d return. One of his favourite activities was to go walking on the hill behind our house with an old neighbour who had plenty of time. (That’s the unfortunate thing about humans, as we grow up our territory expands exponentially compared to a cat’s territory and we are less and less around for old friends.) Recently the old man’s wife died and Pelly started spending more and more time with him, sitting on the old man’s lap or chest to keep him company.

Then one day Pelly didn’t come home for days. I knew he was helping our old neighbour recover from grief so let it be. Still, each day I thought to myself I need to go and check up on them but didn’t. Instead, I thought if anything happened I would be the first to hear. A few days later the old man came to tell me that Pelly had died. He had jumped through the cat door of a neighbour’s house while they were on holiday and for some unknown reason had not come back out. We are not sure if he died suddenly or if he was was unable to reach out and no-one came looking for him.

Throughout his life and even in death, Pelly taught us about the importance of caring for others by reaching out. We always think people will call us when they really need us but actually this seldom happens. Sometimes they just can’t, for various reasons. Pride, shame, feelings of unworthiness, illness, injury or even depression sets in and disables their capacity to reach out. It is up to us, like Pelly, to reach out and connect while we can; check up on our neighbours and old friends instead of waiting for them to come to us. Find out how things really are for them, and, instead of giving them our own heavy bags to carry, reach out and lighten their load a few paces to remind them of the beauty and wonder of life all around them. Also, like Pelly, it’s the people who you think are fine or better off than you that really need you to reach out, because everyone assumes they don’t need it when actually that is seldom the case. Take Robin Williams for example.

We live in a global village. Who can you reach out to today? Who comes to mind and you think “I’ll do it later” and then don’t? I wish I could tell you this story was inspired by Pelly’s life rather than his death. But that wouldn’t be true.
I’ve put this picture above of Pelly in our kitchen to remind myself and my son to “Exercise our Expelliarmus” – by reaching out to at least two people per day.

How about you? Are you exercising your Expelliarmus? Reaching out and connecting with others is what life is really about.